read the May issue of rez in Issuu: 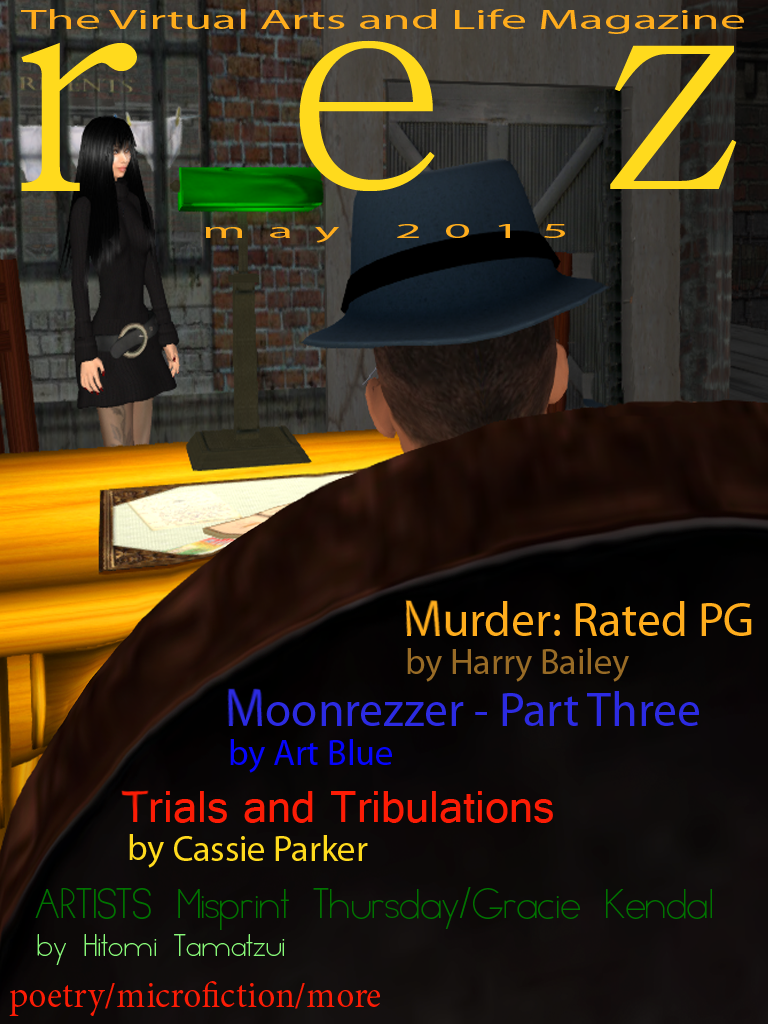 Harry Bailey (aka The Perfect Gentleman) has always had a weakness for a nice pair of legs.  This month he revisits his past in the first of a two-part SL spoof on the 30s crime noir genre, tackling a murder most foul in Murder: Rated PG.  Believe me, you'll never look at the 4" heels on a pair of Bax boots quite the same again.  With his Girl Friday, Friday Blaisdale, keeping Harry centered (how she endures the smoke from Harry's Havanas, I'll never know), they're on the case.  It won't be solved until next month's issue, but this is an exciting first chapter.  Speaking of excitement, Art Blue will be opening his long-awaited art project at LEA14 this month called Moonrezzer.  It's safe to say there's never been anything remotely like Moonrezzer before, nor will there be in the future (and Art knows a thing or two about the future).  As an added bonus, Art opens reveals a "big lie" popularized on The Simpsons. We're used to Hitomi Tamatzui finding one SL gem after another, and this month is no exception. Hitomi chats with two of the brightest stars in the SL art metaverse, Misprint Thursday and Gracie Kendal, who also have exhibits at LEA this month. LEA, it seems, has definitely stepped up its game.  And we know about Hitomi's photographic prowess from prior months. This time, she really brings these dazzling artists' works alive.  Our newest addition to the rez writing staff, Cassie Parker, asks probing questions about the performing arts in both RL and SL, having been captivated by the dance productions of Chrissy Rhiano.  We look forward to many, many articles on the arts (as well as some short stories if we get lucky).  Crap Mariner reveals another of his fetishes (of which there are many) this month in his 100-word piece of microfiction, Kissing Booth.  And bringing the issue to a close is one of our very favorite poets, Zymony Guyot, who shares with us his passion for Picasso in his stellar work, Picasso in the Cloudy Afternoon.
Posted by Jami Mills at 12:25 PM No comments: