read the February issue of rez in issuu: 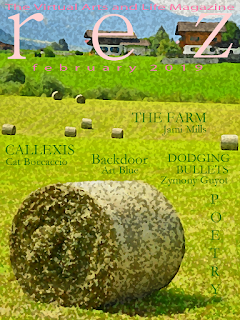 Punxsutawney Phil, Seer of Seers, Sage of Sages, Prognosticator of Prognosticators, and Weather Prophet Extraordinary, appeared today and didn’t see his shadow, which, as legend goes, means we’re in for an early spring.  Forget that historically, PP’s prognostications have only been right 39% of the time. What has been proven month after month, however, is that 100% of the time rez Magazine has presented the grid’s finest writers, be it micro-fiction, short stories, virtual news reporting, or world-class poetry.  This February's issue is no exception.  We’ve reprised Jami Mills’s short story, The Farm, featuring a sensitive young girl who stands up for what she believes in.  Zymony Guyot delivers a powerful punch this month with his poem, Dodging Bullets, which simply takes our breath away. No one describes more artfully than Consuela Hypatia Caldwell when two lovers blend into one, in her beautiful poem, Two Hues. Where in the world has Art Blue been?  Right at your backdoor, urging us to get a much needed update, in his short piece, Backdoor.  Cat Boccaccio, who always says more with less, contributes Callexis, a magical story about a mask like no other.  The Blank Theorem finds its way into our pages and makes us question what is and what is not, thanks to another Art Blue thought piece.  Rounding out this wonderful issue is our favorite poet, RoseDrop Rust, who dissects his way through the most profound of thoughts with his poem, The Anatomical Display. Just because Punxsutawney Phil didn’t see his shadow shouldn’t give us any false hope.  But the February issue of rez is as close to a sure thing as there is.  Enjoy!
Posted by Jami Mills at 9:34 PM No comments: