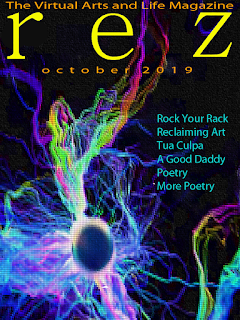 As the days get shorter and our favorite season is upon us, have no regrets about the summer reading you never got around to. We have an answer for that with this month’s issue of rez.  Starting things off is Substance D’s Tua Culpa (Your Fault), who addresses fundamental issues of truth and falsity in today’s universe and comes to some surprising conclusions.  Rakshowes is back this month with a light, fun poem, The Shoot, and she deftly brings us into the photographer’s studio while her model cavorts before the snapping of the randy photographer’s camera. Our beat writer, Barbie Starr, covers one of Second Life’s most important charity events in Rock Your Rack, and gives us an informative look at the history of the quest to find a cure for breast cancer. Dearstluv Writer contributes an astounding poem, Defeated, which overflows with anguish – a difficult but important poem from one of SL’s most beautiful voices. Cat Boccaccio is back again with another piece of micro-fiction, A Good Daddy, a hard-hitting piece about the sins of a father being visited upon the son. Faithless is RoseDrop Rust’s contribution this month and it is a stunning rebuke of those who fail to deliver on promises of artistic freedom and support. Art Blue, who follows American culture more closely than most Americans, explores some futuristic television themes in Reclaiming Art. Merope Madrigal looks to the stars in the first of her “Star Poems” with What’s In A Nebula?,” an other-worldly look at our relative insignificance. We’re also pleased to have Drover Mahogany back (you may remember his stunning Footfalls Echo series) with an insightful look into the ultimate act of creativity. And finally, Consuela Hypatia Caldwell brings our issue to a happy close with an ode to those heady days of the 60s at Yasgur’s farm with Woodstock. Enjoy your new autumn reading list!
Posted by Jami Mills at 12:04 PM 1 comment: