Read the January 2014 issue of rez in Issuu: 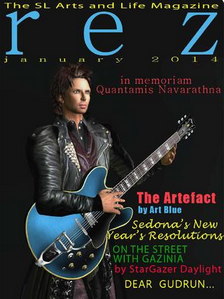 The January issue of rez pays tribute to one of SL's most talented singer/songwriters, Quantamis Navarathna, who passed away unexpectedly last December after a brief illness.  We honor his talent and his humanity. We've included in this issue the lyrics of his song, To Sedona: I Wish You Peace.  We won't forget him anytime soon. We also introduce a fresh new direction this month with the first chapter of a cybertech thriller, The Artefact, by the talented futurist, Art Blue.  Regular contributor, Luna Branwen, gives us a thoughtful poem, Our Business, which examines the role of creativity and just how much is really original.  In On the Street with Gazinia, StarGazer Daylight interviews Gazinia, a self-proclaimed "person on the street," about her insights into the fashion world, and gets some great shopping tips in the bargain.  Gudrun Gausman offers us some historical perspective on the origins of New Year's resolutions.  (I, for one, resolve to read more Gudrun Gausman in the coming year.)  Gudrun also tips her hat to "the dour grain" in her poem Oatmeal, and shares with our readers some of her favorite recipes (even some savory versions). Sedona Mills reminisces about 2013 and contemplates what shape her New Year's resolutions may take in her article, Sedona's New Year's Resolutions. And finally, Crap Mariner makes a wish in When You Wish Upon a Star, then promptly wishes he hadn't.
Posted by Art Rez at 5:42 PM